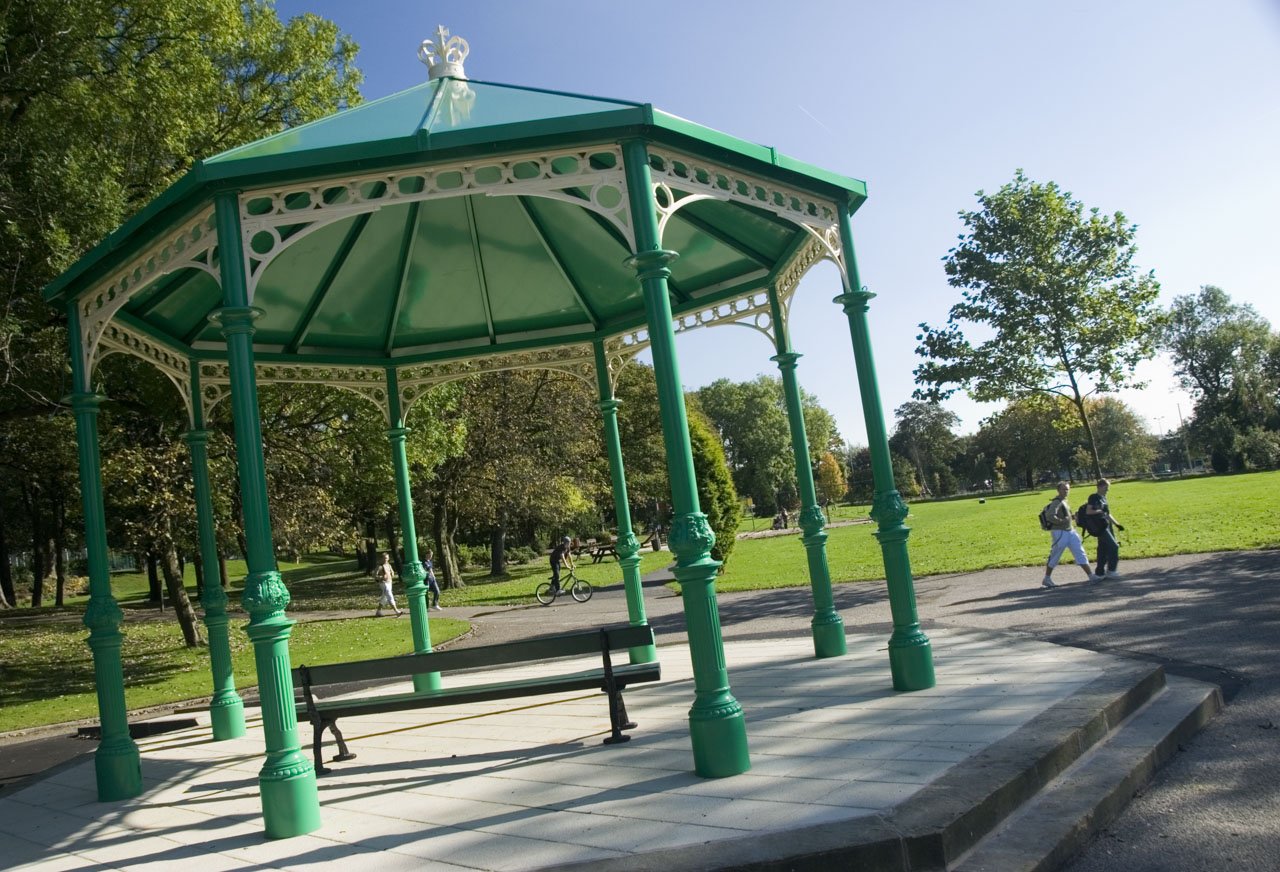 In 1888 Sir John Hardy Thursby donated 11.2 hectares of land to Burnley Corporation for the creation of Burnley’s first public park to commemorate Queen Victoria’s Golden Jubilee, celebrated the year before, hence the name Queen’s Park. The land, valued at £27,000, was adjacent to a mine owned by Sir John Thursby at Bank hall and was “a bare irregular slope with hardly a vestige of foliage”.

A design for the proposed park was drawn up by Robert Murray and work commenced in 1891. During the two years of construction 27,500 trees and shrubs were planted at a cost of £12,000 and on the 1st July 1893 the Park was officially opened by Sir John Thursby with a procession, massed bands and a luncheon.

Original features included outdoor gymnasia, a bowling green (a second was added someyears later), bandstand, tennis courts, and putting green. The remainder of the Park was laid out with ornamental features such as the monument and floral displays.

Most original features still survive, including the imposing gates, although these are now separated from the Park by the Queen Victoria Road extension. The only features no longer in existence are the gymnasia (now “The Ginny”, a storage area for Parks Services), and the original bandstand.

There is an octagonal ornamental badstand/performance space, that regularly hosts concerts and other events and is available for hire, contact 01282 425011.

The Pavilion Cafe is a laid-back, quirky alternative to the usual town cafes and is a great place to meet for people who love the outdoors.

The Friends of Thompson & Queens Park helped raise £30,000 to construct the cycle track in Queens Park. It is in the form of a mini version of a road layout with crossings, signs and road markings, just like the real thing! It give’s children under 12 the opportunity to learn to ride their bikes in a safe environment away from the roads and traffic.

Friends of Queens and Thompson Park

The friends group has been active since 1998 and meets every month in the ranger base in Thompson Park. Details of meetings can be found on the notice board in the park.

The Friends have supported many improvements in the park over recent years including developing a sensory garden, re-painting the pavilion, providing log benches and helping to organise events such as Christmas and Easter activities, brass in the park and the Ranger Open Day. New members are always welcome. For more information on the friends group call Michelle Wolfenden tel: 07759 739360

Manage Cookie Consent
To provide the best experiences, we use technologies like cookies to store and/or access device information. Consenting to these technologies will allow us to process data such as browsing behavior or unique IDs on this site. Not consenting or withdrawing consent, may adversely affect certain features and functions.
Manage options Manage services Manage vendors Read more about these purposes
View preferences
{title} {title} {title}