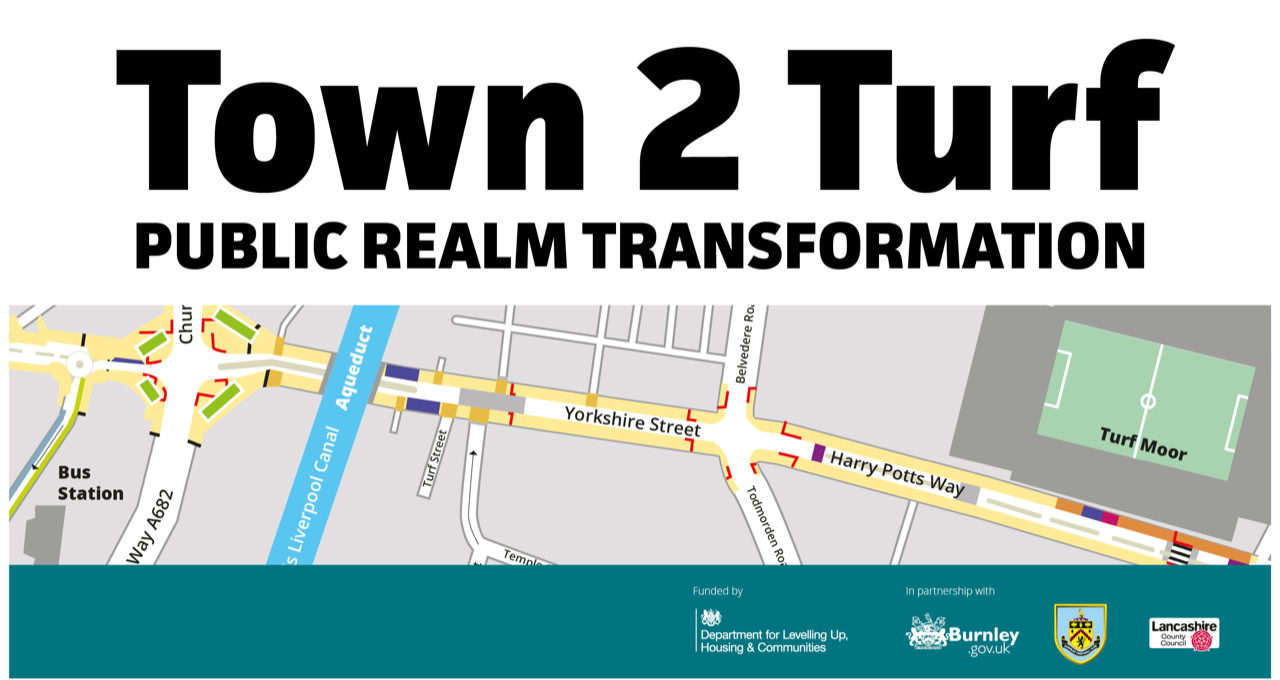 Work is set to start on Monday (16th Jan) on the Town2Turf regeneration scheme in Burnley.

Work will begin on Harry Potts Way, with the initial phase of work to improve pavements due to be completed in May.

It is the first phase of a major £6.1 million project to improve pedestrian links between the Turf Moor area and Burnley town centre. Work on the overall project is set to be completed in summer 2024.

Two-way temporary traffic lights will be in operation at times throughout the scheme, moving along the road as work progresses. The lights will be in place as and when necessary. At other times, when lights are not needed, the width of vehicle lanes will be reduced to allow continuation of two-way traffic.

Work is due to start on the Park View pub side where a section of the pavement will be closed but access will be kept open for businesses at all times. Once work on that side of the road is completed it will move over to the northern (football club) side. Temporary arrangements to allow pedestrian access will be in place.

Work has also been carried out to clear vegetation around the historic aqueduct carrying the Leeds and Liverpool Canal over Yorkshire Street. Further work to refurbish the aqueduct, including re-sealing the structure to prevent corrosion, cleaning of stonework, and repainting, will be carried out later in the scheme.

The project is being funded through Levelling Up grant money and other funding and undertaken in partnership between Burnley Council, Lancashire County Council and Burnley Football Club.

It forms part of wider plans to create a “regeneration corridor” from one side of the town centre to the other, from the Weavers’ Triangle through to Turf Moor.

Councillor Mark Townsend, Burnley Council’s executive member for economy and growth, said: “It’s great to see this exciting scheme get underway. It will make it easier for pedestrians to get between town centre and Turf Moor and hopefully on match days, it will encourage supporters to park in the town centre rather than around the football stadium. That would help ease parking pressures in the residential areas around the stadium. It will also make the day-to-day walk for residents in and out of town more pleasant.

“This is a popular route but it is in need of investment and this scheme will brighten up the whole area as well as making it safer and more pleasant for people using it.”

County Councillor Rupert Swarbrick, Lancashire County Council’s cabinet member for highways and transport, said: “Improving the way this area looks and feels, and making it safer for pedestrians and cyclists, will be very worthwhile as the journey between Turf Moor and the town centre is regularly made by thousands of people.

“Investing in public areas such as this improves the experience of everyone who uses them, and helps the local economy by encouraging further investment in the town.”

The scheme will include the roundabout at the junction of Yorkshire Street and Church Street being replaced by a traffic light junction with pedestrian crossings, the subway under Centenary Way being closed and the area landscaped, changes to the road system around the bus station, new pedestrian crossings, and improved paving, seating, and lighting.

« Shopfront improvements will boost Burnley town centre
Annual Holocaust memorial service »
Manage Cookie Consent
To provide the best experiences, we use technologies like cookies to store and/or access device information. Consenting to these technologies will allow us to process data such as browsing behavior or unique IDs on this site. Not consenting or withdrawing consent, may adversely affect certain features and functions.
Manage options Manage services Manage vendors Read more about these purposes
View preferences
{title} {title} {title}