> Home > Above and Beyond awards recognise community champions

Above and Beyond awards recognise community champions 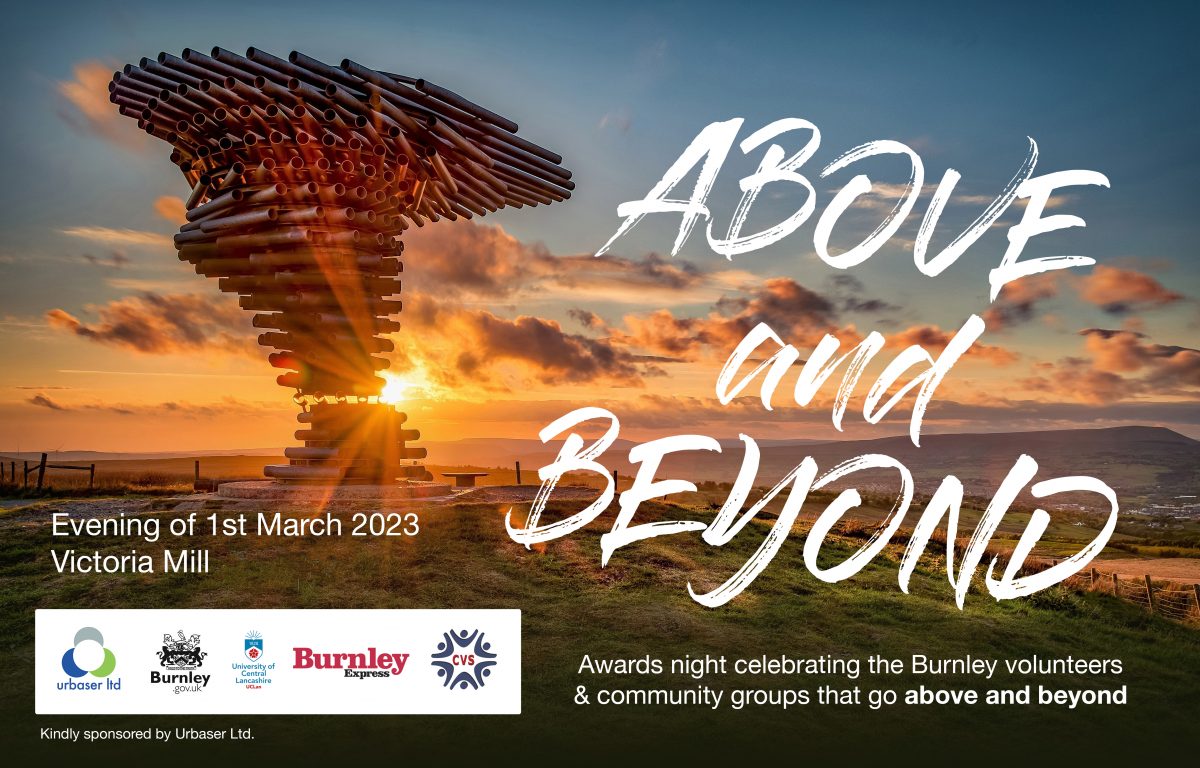 A series of awards to honour the hard work and dedication of individuals and groups within the borough of Burnley’s voluntary and community sectors have been launched.

The Above and Beyond awards ceremony will take place on 1st March 2023 at the University of Central Lancashire’s (UCLan) Victoria Mill site in Burnley. The host for the evening will be East Lancashire Chamber of Commerce director Simon Brierley.

Nominations are now open; people are invited to put forward nominations for an award

There are 10 categories of awards (see below) and you can submit a nomination against as many categories as you wish. Details about each category and the criteria applied can be found in the link above.

Nominees, either individuals or groups/organisations, must either live or be based in the borough of Burnley.

The Above and Beyond awards have been developed in partnership between Burnley Council, Burnley, Pendle and Rossendale Council for Voluntary Service (CVS) and the Burnley Express.

The lead sponsor of the awards is Urbaser, which provides waste collection and street cleaning services for the borough.

Council leader Councillor Afrasiab Anwar said: “There is a whole army of unsung heroes in our borough who go ‘Above and Beyond’ day in, day out to help others around them and they never ask for or get recognition for their services.

“We felt we wanted to play a small part in putting that right and honouring those people and groups that work quietly but relentlessly away in the background but make a real and significant difference to people’s lives.

“They do it without any fanfare; this is our chance to say a massive ‘thank you’ for your hard work and dedication.”

Jose Ramon Sanchez, of Urbaser, said: “Urbaser is delighted to be the main sponsor of these wonderful awards. The ultimate recipients, whoever they may be, don’t do what they do for acclaim or to be in the spotlight. They do it because they care about others. But we feel that it’s only right that they are given due recognition in some small way for their community spirit and for the vital support they unselfishly give to others.”

“Our town has so many things to be proud of, but what always stands out for me is its community spirit.

“These awards give us an opportunity to say ‘thank you’ to all the unsung heroes whose unwavering dedication to helping others makes Burnley such a welcoming and special place to live.”

Christine Blythe, chief executive officer of BPRCVS said: “It is really important that voluntary sector organisations are recognised for the wonderful support they gave during the pandemic and continue to offer during these increasingly difficult times for our community.

“Volunteers give their time freely and these awards will go some way to highlighting the amazing contribution made by so many people who volunteer in so many different ways to support people who are struggling.

“Sadly, we can’t give every volunteer an award, although they all deserve one. However, the nominations and winners will showcase the amazing people we have in Burnley who do give their time to help others.”

« Burnley Council successful in bidding for further Government funding
Free business workshops for start-up entrepreneurs »
Manage Cookie Consent
To provide the best experiences, we use technologies like cookies to store and/or access device information. Consenting to these technologies will allow us to process data such as browsing behavior or unique IDs on this site. Not consenting or withdrawing consent, may adversely affect certain features and functions.
Manage options Manage services Manage vendors Read more about these purposes
View preferences
{title} {title} {title}